THIS chapter covers only diagnosis and repairs peculiar to GE-built dryers.

If you do not read Chapter 2 thoroughly before you read this chapter, you probably will not be able to diagnose your General Electric machine properly!

Figure GE-1 shows the general layout of these machines.

The blower fan is attached directly to the front of the drive motor. The drive belt comes directly off the rear of the motor and goes completely around the drum.

Electrical model GE dryers use a double heater element. One of the two elements is energized for the low heat cycle; both heaters are energized for high heat. Late models have the heater elements contained in a cylindrical heater chamber fastened to the right front baseplate of the machine. In earlier models, the heaters are in a circular chamber directly behind the drum. GE went kind of crazy with thermostats for a while. I'm sure their design engineers know what they're doing, but...well, let's just say that to my experience, GE machines tend to have more thermostats than other brands. Moreover, they tend to migrate from model to model. Your model may have thermostats in just about any of the places shown in figure GE-2.

The most common problems with these machines are:

1) Noisy operation. If you hear a very loud clattering sound, the belt could be broken. When the belt breaks in these machines, the tensioner touches the motor pulley and causes one heckuva loud racket. To confirm this diagnosis, check to see if the drum is turning. Replace the belt as described in section 4-3.

Another common cause of noise happens when the drum front support glides wear out. This causes a pronounced scrubbing sound (metal-to-metal.) Also, if they are worn badly, you will see the top inner lip of the drum wearing the inside top of the clothes port. The solution is to remove the front of the cabinet as described in section 4-3 and replace the drum front support glides .

A squeaking or squealing noise can be caused by the rear drum bearing wearing out. Remove the drum and replace the bearing as described in section 4-4.

2) Heating problems. Diagnose and repair as described in Chapter 2.

Each of these components has its own access panel:

The gas burner access panel is located in the lower right front of the cabinet. To open, push in on the top of the panel. The bottom is on nylon snaps and will pop off. Then just lift the panel out.

The belt tensioner is accessed through the bottom panel of the back of the dryer.

The rear drum support bearing is accessed through the small panel in the center of the back of the dryer. In newer style machines, there is no access panel; you simply remove the cabinet top and front and slide the drum out. Several different methods have been used to fasten the front panel to the cabinet top (figure GE-3). Unscrew the screws or pop the catches and lift the lid of the dryer.

NOTE: If you are testing the heaters of rear-heater models, the terminals are accessible at this point. Look to the rear of the drum on the right side. You can test them as described in section 4-6. In bottom-heater models, you must remove the front panel as described below to test the heater element.

Loosen, but do not remove, the two screws at the bottom front corners of the front panel of the cabinet.

Unscrew the two screws at the top front corners inside the cabinet. Disconnect any door switch wires and lift off the front panel of the dryer.

You can replace the belt at this point, without removing the drum. Release the belt tension as described in section 4-4. You can slip the belt between the drum and the glides.

Once the cabinet front panel is off, inspect the blower wheel at the lower left corner of the dryer for foreign debris, excessive lint or broken blades.

The blower hub has a two-piece clamp which will fall apart if you remove it, so do not remove the hub clamp unless you plan to remove the whole motor and blower housing assembly as described in section 4-4.

Also while the cabinet front panel is off, inspect the felt seal inside the front panel for wear, excessive lint, or any debris that might be stuck to it.

Remove and inspect the front drum support glides as shown in figure GE-4. Newer models have three glides attached to the inside of the front panel. Whether they're badly worn or not, it's a good idea to replace them as cheap insurance against future problems.

In old-style machines, the drum must be removed to service the electric heaters, or to remove the blower or motor, to replace the rear drum bearing.

Open the rear cabinet bottom panel. Reach inside and remove the belt tension as shown in figure GE-5. 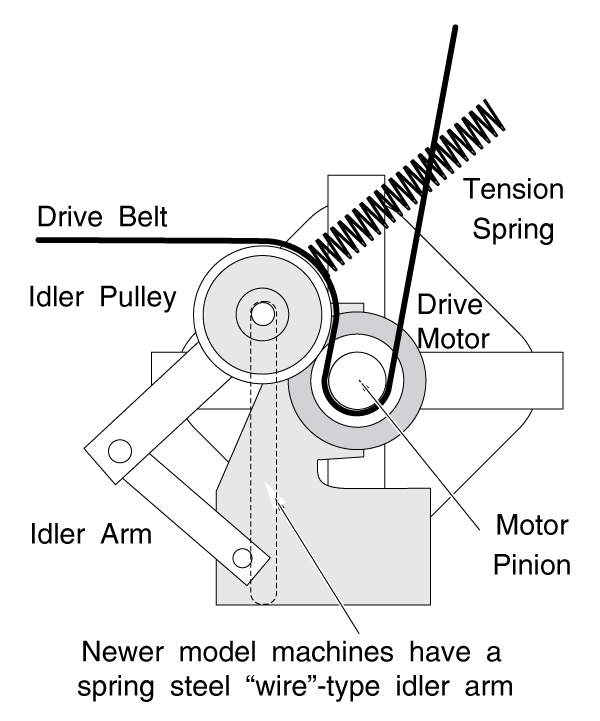 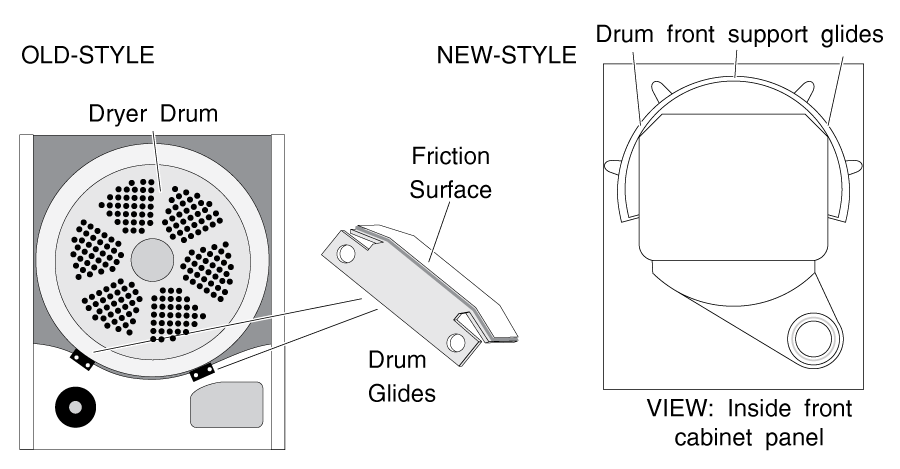 Inside, you will see the drum support shaft and an "E-"ring holding it in place. Remove the "E-"ring with a small screwdriver. If you have a magnet, you may also be able to use it to avoid dropping the ring inside the dryer.

Remove the cabinet front panel as described in section 4-3. In certain models, you will also need to remove the front drum support glides to get the drum out.

Once the cabinet front panel is off, you should be able to lift and slide the dryer drum straight outward.

While the machine is open, vacuum out all accumulated lint. Be careful not to knock any wires loose.

When re-installing the blower, you must align the blower wheel so it does not touch the blower housing. To do this, loosen (but do not remove!) the clamp that holds the wheel to the motor shaft.

The heater elements can be tested without removing them. Note which lead goes on which terminal and remove the leads from the terminals. The two heater elements are tested separately, if one is bad, BOTH must be replaced. Test them as described in Chapter 2. The elements are wired as shown in figure GE-6.

In rear-heater (circular) models, the elements must be pre-stretched to the correct length before installing. Follow the instructions that come with the new heaters. DO NOT OVERSTRETCH THEM! It's better to leave them an inch or so short, and work them to the proper length when the heater element is in place in the dryer. Also, make sure you inspect the porcelain insulators and replace any that are cracked or broken.

In bottom heater GE clothes dryer models, the whole heater chamber is replaced. Remove the two screws holding down the front end of the chamber and the back end just slips out of the heat riser.